Godfrey Ho.  Some of you may already know what we're in for just from that name.  For those who still have their sanity and have never delved this deep into the waters of Z-Grade Kung-Fu, I'll give you an explanation.

Godfrey Ho's imdb page contains over 100 movies which he directed.  Over 50 of these movies contain the word "ninja" in the title.  He achieved this prolific output with something called the "cut-and-paste" technique, which really just means most of his movies are made of stolen footage with original footage spliced in.  Then through editing and dubbing, the two story-lines from the two separate films interact briefly a couple of times.  Usually both films will share a McGuffin.  Another staple of Godfrey Ho films is that the original footage would usually star white actors.

This is the first Godfrey Ho movie I watched all the way through, and what an introduction it was.  It has just about everything a Godfrey Ho movie needs.  Stolen footage from a ridiculous movie, added footage with goofy white guys, ninjas, silly dialogue, ninjas and ninjas.  Also, this review will be much funnier if you keep in mind the assumption that this is supposed to be a kid's film.  It still remains one of my favorite Godfrey Ho movies (second to Ninja Terminator). 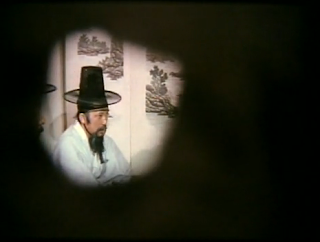 The film literally starts with the characters from Movie A watching the events from Movie B through a peep-hole.  The villains from movie B (who never actually appear again, as they are replaced by different villains, more on that later) are conspiring to hire The Black Ninja Force (in Godfrey Ho movies, ninjas wearing black is an odd occurrence, so they need to be specified) to steal the Golden Ninja Warrior Buddha Buddher.

It's then that we meet the heroes (?) of Movie A:  A stereotypical muscle-bound 80s guy and his crotchety old father. 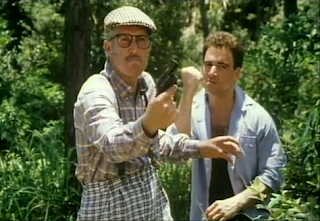 So the villagers discover that the Buddher has been stolen by the Black Ninja force, and our ridiculous duo begin their plan to steal it from the Black Ninjas.  I don't really know or care what the names of these characters are, so from now on, I'll refer to them as Captain 80s and Old Man Jenkins.  Captain 80s pulls out a gun to ambush the Black Ninja with the Buddher.  Old Man Jenkins says that this won't work, and then pulls out his case of special bullets (note:  this will become important later).  He chooses one which will allow them to get the Buddha from the ninja, although he doesn't say how. 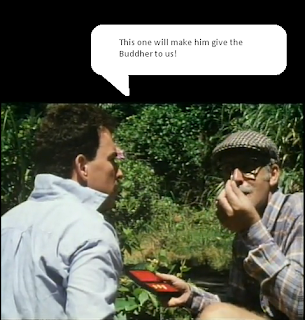 The special bullets seems to do nothing, so Old Man Jenkins has Captain 80s fight the Ninja.  Captain 80s shoves Jenkins to the ground and begins fighting the Ninja, who slowly begins to feel the effect of the sleeping agent in the bullet (it seems a normal bullet would have been more effective).  Old Man Jenkins decides finally that maybe shooting the ninja WOULD be the best idea, but the Ninja teleports away in a puff of smoke, only to be spotted seconds later running into the woods with the Buddher.

Their plot continues with them hiring a female Yellow Ninja to go after the Black Ninjas and get them the Buddher.

Meanwhile, in Movie B, 3 kids (who I can only assume are supposed to be the Thunder Ninja Kids, although this is never stated) decide they want to go to the big city to visit their aunt.  They don't have much money so they decide to walk.

Now, they try to show the culture-shock of kids from a small village going to the big city, but it ends up coming across as the type of culture shock that only happens in time-travel movies, when someone from the past visits the present and is confused about everything.  The kids start wandering the city, bamboo staffs in hand, ready to attack anything they think could be a spy sent from home to bring them back, up to and including themselves reflected in the mirror. 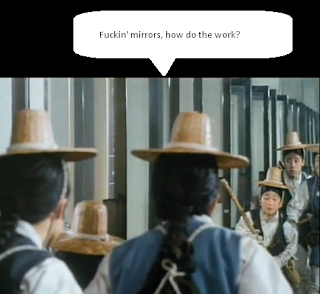 At first I thought of this movie as being in type 2.  That is, until the Thunder Ninja Kids joined the goddamn mafia.


See, they are tricked into delivering mafia documents in exchange for free food.  However, once their in, and they want out, the mafia kidnaps their aunt.  Also, for some reason, the Thunder Ninja Kids believe that the mafia has the Buddher.  Awesome fight scenes ensue.  Also, the little Thunder Kid of indeterminate gender turns out to be a badass.

The Thunder Ninja kids go find the woman who has the Buddher, and fight her guards, after which she gives the Buddher to them willingly.  But not before they do the most confusing martial arts moves I've ever seen. 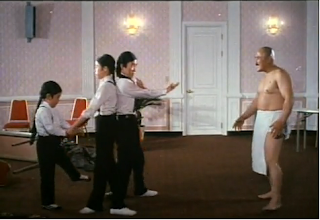 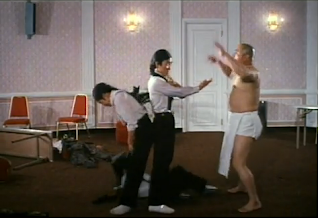 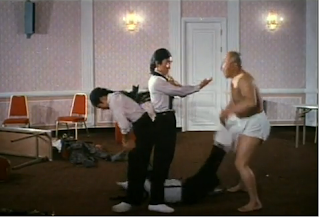 Long story short, they get the Buddha, but then have to give it to the mafia as ransom for their aunt, but then beat up the mafia to get it back, and then laugh at the mafia as they all scurry around the ground to pick up the money lying everywhere in the aftermath of the battle.

Meanwhile, Old Man Jenkins and Captain 80s are battling the Yellow Ninja.  They try tricking her into taking an empty suitcase rather than the one filled with money they got from selling a fake buddher.  This continues with Yellow Ninja catching up with our intrepid duo, and Old Man Jenkins trying to give her the slip.  Finally, fed up, she throws THE NINJA BOMB!  This leads to one of the best lines in the movie: 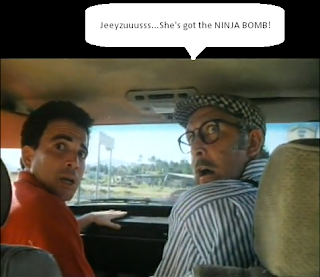 They end up in a gunfight with Yellow Ninja, who keeps jumping around until they run out of bullets.  Yellow Ninja then decides to play a game with the duo.  She gives one a gun, and the other a bullet, and tells them whoever gets both and shoots the other gets to go free.  She sees no flaw in this plan, but neither does the director, so it's fine.

Through some trickery, Jenkins replaces the bullet with one of his  special bullets, and gives it to his son, who has the gun.  When his son won't shoot him, he pulls out a fake gun and shoots himself.  Now, remember when I said this is funnier if you assume it's supposed to be a kid's film.  Behold the following line: 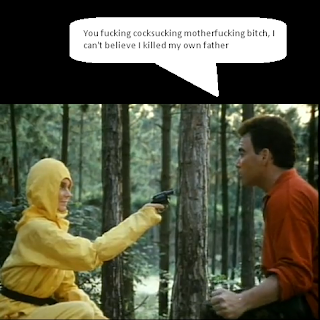 So Yellow Ninja decides to shoot him as well, not counting on the fact that Jenkins had put a special bullet in the gun.  An explosive bullet.  An explosive bullet that only blows up the gun that it's in.  God damn, who'd have ever thought that would be useful.  Yellow Ninja explodes, and father and son argue about how the father nearly killed the son with an exploding gun trap.

Okay. So this movie is terrible.  But I love it.  I would consider myself a connoisseur of bad movies, and this is one is a fine example of so-bad-it's-good.  Over-the-top acting, nonsensical plots, brightly colored Ninjas and absurd martial arts.  It all collides here in a movie that shows Godfrey Ho doing what he does best.  Making terrible movies about ninjas.